Cortney Robertson is the founder and CEO of I Believe In Me, or IBIM for short.  IBIM currently operates in both the Turner Station and Woodlawn communities.  The organization focuses on empowering girls from ages 8-18, teaching them how to become the best versions of themselves. Robertson’s experience as a mother and daughter of a single parent household inspired her to found IBIM.  “Watching my daughter grow into a young woman has felt like one of my greatest accomplishments yet.  She watches my every move and looks to me for guidance. I realized while watching her one day that every girl needs someone to guide them through the life.  I wanted to be that for girls that may not have that at home or may just need an extra dose. I wanted to be the person that helped expose them to more in life beyond their communities.  I never want their limits to be set by what they see around them every day.”

When Robertson reflected on her childhood and teenage years, she realized how insecure, impressionable and unclear of her own worth she was.  “I am thankful for the strong, confident, caring women that were placed in my life. Having mentors around me that pushed me to do more created a sense of strength and power within me that has allowed me to remain consistent and determined. I feel an obligation to help empower the next generation of young girls gracefully transition from adolescence to womanhood.” 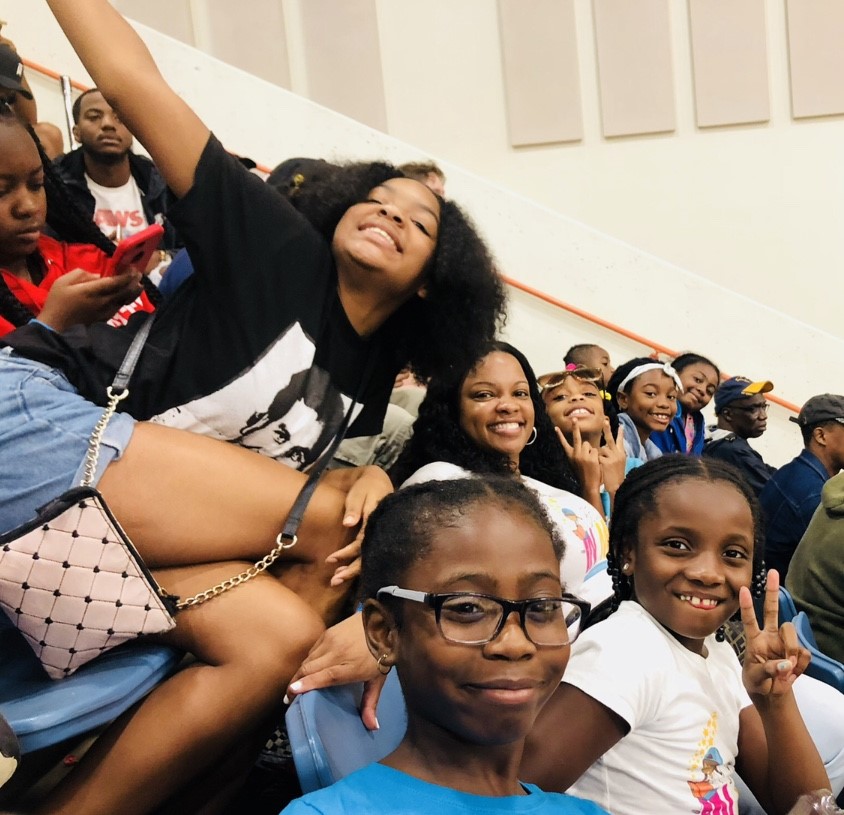 IBIM’s mission is “to empower girls to B.E.L.I.E.V.E (Become Emerging Leaders Inspiring Excellence and Values Everyday) through group mentoring and leadership training necessary to become responsible, productive and successful members of our community.” IBIM has weekly sessions, hosts events and even blogs about issues and tough subjects that girls might feel uncomfortable discussing with teachers, parents, or other family members.  The entire program is a safe space that empowers girls to live up to their full potential.  The community of Turner Station sponsors a trip to DC for the USA Science and Engineering STEM Festival in D.C.  Robertson’s IBIM girls routinely fill all 55 seats—a testament to her mentorship.

Robertson is no stranger to Turner Station.  She grew up in the area and attended Logan Elementary school until 4th grade when her family moved to Woodlawn.  “I have very fond memories of my childhood growing up in Turner Station. I loved walking in the annual baseball parade, watching the summer basketball leagues in the summer under the lights at the Fleming School, and crabbing on the pier,” Robertson said.

“I wanted to empower girls from elementary school through high school to go for the more and reach for the stars,” Robertson said.  “I noticed that boys had a ton of resources by way of sports as well as mentoring programs, but there wasn’t much for the girls to do.”

Robertson first started mentoring high school students in 2010 through Eagle’s Nest Outreach and became their program Director the following year, expanding their outreach efforts to better retain the young female demographic.  In 2016 Robertson landed a position with Murphy Falcon & Murphy as the Executive Assistant to both William H. “Billy” Murphy, Esq. and Zachary McDaniels.  During her tenure with the Murphy Firm she was exposed to the world of politics and community engagement on higher level, which is where her love for people and passion for community change grew rapidly. Her work at Murphy, Falcon & Murphy exposed her to the non profit sector.  As McDaniels executive assistant, Robertson coordinated and executed events for PHILANTHROPIK, McDaniels non profit.  “I learned how to do everything in the background from securing sponsors to marketing the event.  It was here that I developed the skill and know how to run my own organization,” Robertson said.

Currently Robertson works with the president of PHILANTRHOPIK, a nonprofit in Baltimore that enables professionals an opportunity to volunteer and donate to charity organizations like Baltimore’s Youth Works Summer Jobs Program and the Ronald McDonald House of Baltimore.

Robertson was nominated by Larry Bannerman, Turner Station Conservation Teams board member and long time resident of Turner Station.  When we asked him for a quote for this blog he said, “I would run out of writing room talking about Cortney Robertson and all that she has done and continues to do with youth in our community and beyond. From teaching self-worth to leadership skills to social skills to understanding social justice to community engagement to STEM events, to fund raising for all these things.  Sometimes it seems like she is doing the work of 20 people.”