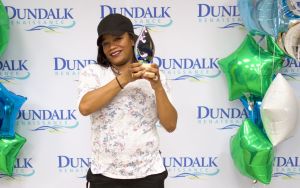 Seiko Dixon’s life is one of service. Seiko enlisted in the Army after high school graduation.  From there she became an in-home nurse—which was how she connected with an old elementary school flame.  John Dixon needed a full time care taker for his grandmother who was battling cancer.  Seiko said yes and moved in with John’s mother making sure she had everything she needed.  John and Seiko later married.  The couple moved in with John’s grandmother, who beat cancer and was in remission.  After living together for some years, the couple found an affordable apartment for their growing family in Turner Station.  Seiko joked that she told her grandmother-in-law “I love you, but I’m out.”  Seiko still drives into Baltimore to make sure her mother-in-law has everything she needs and that her medications are up to date.

Seiko’s raised her children with a sense of service, so much so that when they are out walking the neighborhood, her children will ask older neighbors if they need help.  Seiko specifically recalls an instance where her kids asked a neighbor if they wanted their car washed.  The neighbor did.  Seiko and her family returned a little while later with car washing supplies and got to work on the car.

It’s no surprise that Seiko’s children wanted to get involved in local community activities—which is how Seiko was drawn into volunteering with the Boy Scouts and Girl Scouts.  Since the kids first signed up for their respective troops several years ago, Seiko has organized both troops to help maintain and plant flowers at veterans’ graves, visited centenarians for their special birthday celebration, and organized additional service activities for the kids. 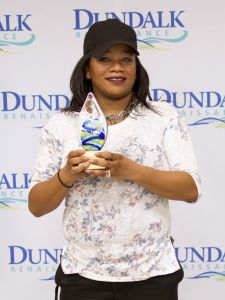 Seiko has an eye for seeing ways to help people.  She routinely checks in on her older neighbors, shovels snow and helps them carry groceries.  During the holidays Seiko organizes baskets of food for families in need, manages several gift card drives for individuals experiencing hard times, volunteers at food and clothing giveaways at local churches, decorates mini trees at the holidays for seniors and has been known to scour second hand shops with her children for hats, gloves, and scarves to hand out to anyone they see experiencing homelessness.

In addition to her extensive volunteer work in our community, Seiko is working on a small body care business.  What started as a passion project is now a small business that helped bridge the gap when she was laid off by her employer. Relatives and neighbors began requesting their own products.  Seiko makes everything from body washes and soaps to perfumes.

“My talent is my creativity,” Seiko explained.  She can turn almost anything into something someone would be delighted to receive…which is exactly how she ended up decorating three giant wreaths for the Historic Dundalk Town Center this past December.

“She’s a person always outstanding in any field,” Seiko’s husband said in his nomination form.

Seiko believes that everyone has the same amount of time in a day, it’s what we do with it that makes a difference.